The Madisonville Volunteer Fire Department was created in 1945. At that time, they had (1) one fire station located at 805 Main Street, Madisonville, La. Presently, this is where the Central Fire Station is located, The O.P. "Bud" Goldate Memorial Fire Station", Station 21. They had (1) one Engine, a 1917 American LaFrance. A few years later, they purchased a 1948 Ford Engine. 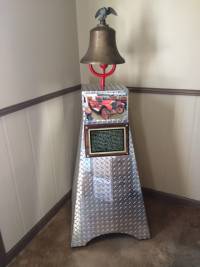 Back in this time era, they had just a few volunteer firefighters. It was convenient for the volunteers, since most of them worked right here in the Town of Madisonville. They would leave their job(s), and go on a call. As time passed, the Town of Madisonville was becoming a popular location for families moving in the Town and on the outskirts of Town. This brought more traffic, and people, which meant more calls.

In 1990, our first Ad Valorem tax millage was put on the ballot, and the people voted on a 20.68 millage to fund, what now officially is St. Tammany Parish Fire Protection District No. 2. This millage was largely voted down. After regrouping and coming up with a better plan, the volunteer firefighters went door to door and talked to the people to try and make them realize how important it was to vote for this tax millage. After a few months, it was put back on the ballot and the people voted largely in favor of the (10) ten year millage. This was the begining of great things to come.

Fires do not readily start. Fires that do start spread slowly with low resistance to control.

Thank you saving many, many people of our country. Everyday you get up to save people from many different things. You may have to save a trapped child in a burning house, or put out a car fire. You may just be saving a cat high up in a tree. Either way you wake up every morning to save people that live in the country you love.

Although you do have to put out blazing fires that are at least 500° F, you did have to train to do that. You had to learn a million gadgets on the side of massive truck. You had to learn how to control a very powerful hose. Though you had to do all this , it obviously paid of.